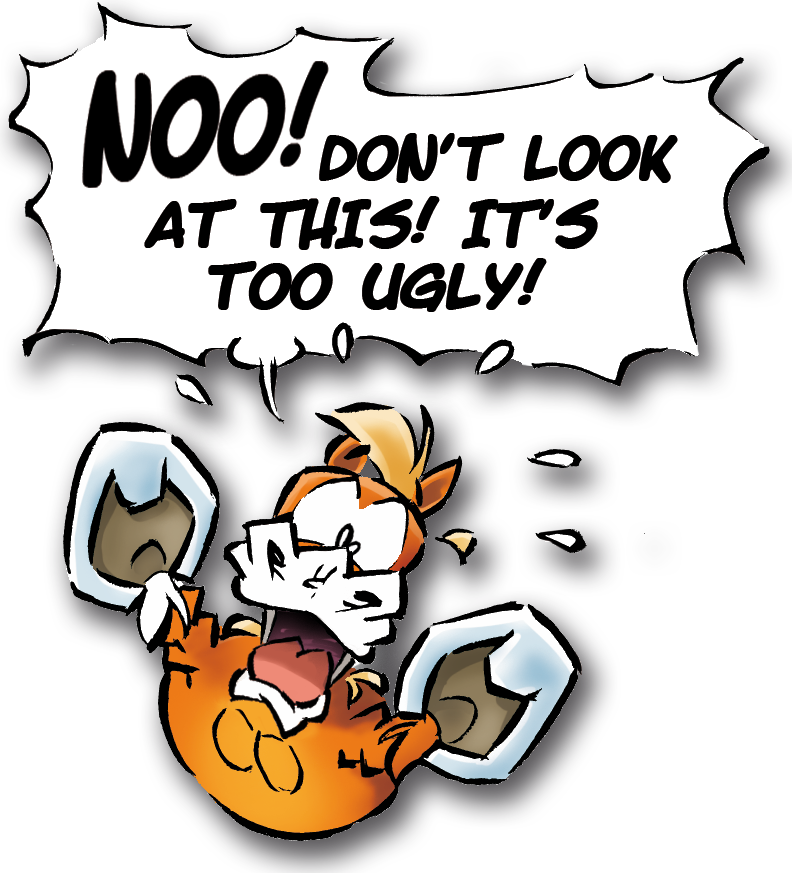 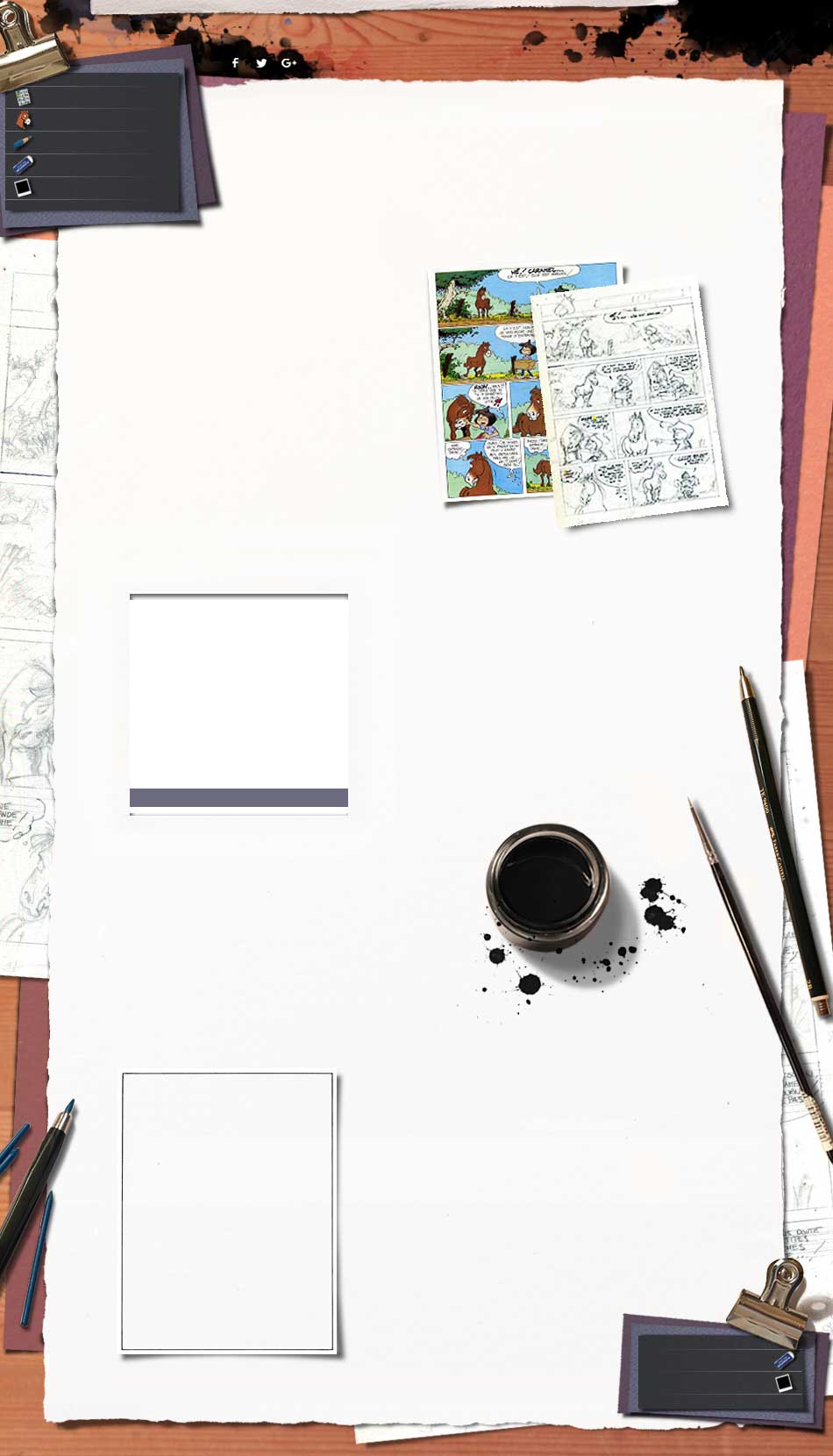 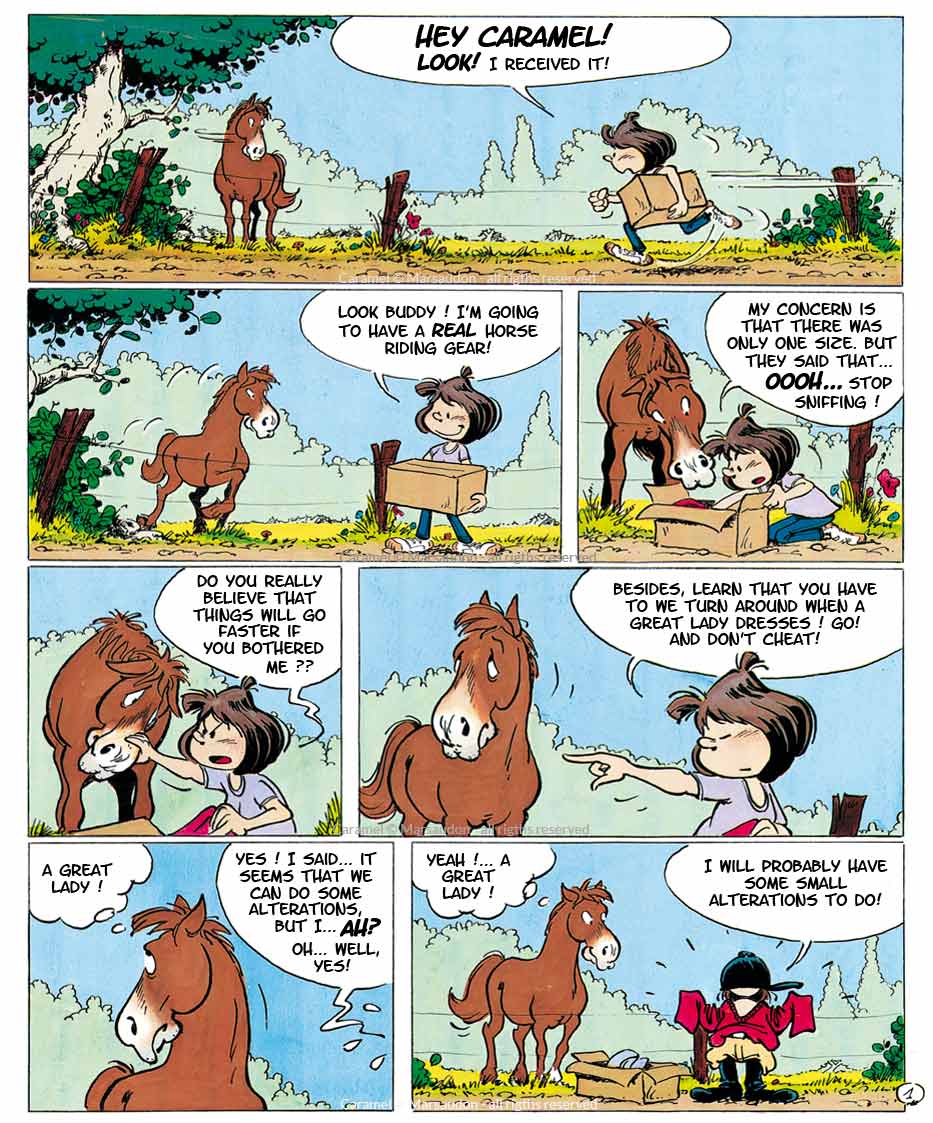 Caramel was created for the release of a new equestrian magazine: 'Cheval Star'.
The editorial director wanted to publish a humouristic comic strip of a different kind in his magazine.

At that time, I had never done any comic strips and was short on experience, having mostly done illustrations for firms, magazines, banks and advertising agencies...

When the editorial director contacted me, he obviously asked me if I knew how to draw horses. But, not only had I never drawn any, I also knew absolutely nothing about horses: I could hardly make the distinction between the front and the back of a horse!
But as nobody can be more of a liar than an unemployed cartoonist, I answered 'yes'!

However, this phone call left me in a panic. It's very difficult to draw a horse and I didn't have the faintest idea of the type of humor I could invent with such a character.

But the project was attractive: I was given carte blanche to create the series as long as it was funny. It was difficult to turn down such an offer when you dream of doing this job!

So I started by doing a few sketches. I wanted the horsehair to appear bleached so that the horse wouldn't look too stern graphically. I wanted him to come over as cute and innocent while at the same time be capable of the worst mischief. His coat colour therefore became obvious to me... and his name followed.
It was as easy as that!

I sent the sketches to the editorial team and they liked the character... and the adventure began. Caramel's first gag was published in the first issue of 'Cheval Star' in September 1991.

And this character has never left me since!

NOTHING HAD BEEN PLANNED

The most amusing thing is that, before starting this job, I never thought I would do gags involving animals. I thought it was too difficult to make an animal expressive and respect its morphology at the same time.

I must also admit that if there was an animal I didn't want to draw, above all others, it was the horse, and this, out of jealousy! My girlfriend loved horses and, in my opinion, spent far too much time with them...

In the end... I have been drawing horses for 27 years and I married my girlfriend!

BRINGING A CUDDLY CREATURE
TO LIFE

Caramel being the mascot of the magazine, I could not just do purely horsey gags. To exist and to bring a 'plus', a mascot needs its own world.
So I focussed on the personality of the horse, rather than any equestrian discipline.

Besides, I also believe my ignorance of the domain helped me a lot. Riders instinctively want to show off their horse’s good points, like its strength, intelligence or loyalty... But for me it was merely a matter of bringing a creature to life!
This distance no doubt helped me to think up some eccentric gags and explore the horse’s graphical prowess. Although horses are difficult animals to draw, they unfurl perfectly on the page into the craziest of postures!
➡ Visit the page In motion.

Today, I take enormous pleasure in illustrating Caramel in all kinds of situations! 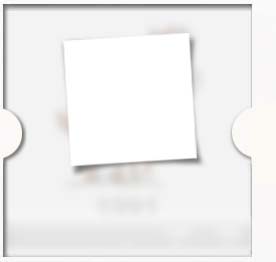 Caramel has evolved a lot graphically since 1991... 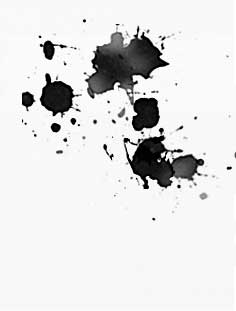 This job is magical: a few ink traces on white paper... and a character appears, looks as if it's moving and comes to life...